The study of genomics has revolutionized our understanding of science, but the field of transcriptomics grew with the need to explore the functional impacts of genetic variation. While different tissues in an organism may share the same genomic DNA, they can differ greatly in what regions are transcribed into RNA and in their patterns of RNA processing. By reviewing the history of transcriptomics, we can see the advantages of RNA sequencing – using a full-length transcript approach – become clearer.

Reaching for the Transcriptome

Even before genome sequencing became commonplace, scientists were able to measure gene expression activity using hybridization approaches like Northern blots, or later, microarrays.  While these techniques provided a rigorous method for RNA measurement, they were limited in that they could only measure known transcripts. Additionally, many of these methods made the subtle differences between transcript isoforms difficult to decipher. The RNA-seq approach yields reads that do not span multiple exon junctions.

As next-generation sequencing (NGS) grew, researchers had the ability to interrogate the activity of all expressed genes including those that were previously unknown. This was a huge leap forward in the ability to characterize the transcriptome in an organism. The approach, known as RNA-seq, quickly replaced microarrays in many labs due to the enormous amount of information it could generate.

Understanding gene activity — not just the genes encoded by the genome, but the ones that are turned on at a specific time or in a specific cell or tissue — is critical for elucidating biological consequences. But even as RNA-seq expanded, scientists grew concerned about the accuracy of results when NGS short reads had to be pieced back together computationally to create whole transcripts. This is especially difficult in complex eukaryotes where one gene can generate many isoforms that differ in their transcription start site and alternative RNA processing. 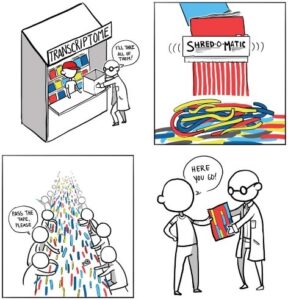 Transcriptome reconstruction with RNA-seq as presented by Korf, I. (2013) Genomics: the state of the art in RNA-seq analysis. Nature Methods.

In a Mendelspod interview, Stanford genomics expert Mike Snyder (@SnyderShot) described the RNA-seq process this way: “We take RNA, we blow it up into little fragments, and then we try and assemble them back together to see what the transcriptome looked like in the first place. … You can’t always figure out which parts of the puzzle belong together.”

A similar concept was presented by Ian Korf (@IanKorf) in a Nature Methods article, where he equated RNA-seq to reassembling magazine articles that had been put through a shredder. Suffice it to say, there have been concerns about the need for extensive computational inference when using an RNA-seq approach.

Capturing the Whole Transcriptome with the Advantages of Long Reads

What scientists really needed went beyond RNA-seq; for the most accurate view of biology possible, they had to have a way to capture isoforms in their entirety. The introduction of long-read sequencing answered this need.

With Single Molecule, Real-Time (SMRT) Sequencing, researchers can generate highly accurate long reads, or HiFi reads, that are tens of kilobases long. That’s enough to capture most transcripts in a single sequencing read, with no downstream bioinformatic assembly required. This became known as the Iso-Seq method because it enabled full-length isoform sequencing, which can be used to explore a transcriptome in its entirety or in a targeted fashion to examine individual genes. HiFi reads enable sequencing of full-length transcripts that span all exon junctions so that transcript assembly is not needed.

The diversity of cleavage sites detected in a sorghum gene as identified with SMRT Sequencing.

Gain a complete view of the porcine transcriptome including the identification of genes missing in the assembly. The Iso-Seq method reveals a functional Igμ, a gene fusion event between IGH and DUX4, as well as an antisense DUX4 gene copy. Six patient samples were sequenced and phased, revealing double mutations in the PIK3CA gene located on the same allele (cis). The length distribution of lncRNAs identified in C. breviculmis using the SMRT sequencing.

Full-length transcript sequencing offers many benefits to scientists looking to interrogate transcriptomes. Whether exploring the human transcriptome to better understand health and disease or studying plants and animals to advance agricultural or conservation efforts.

Learn more about how discovering full-length transcripts could make a difference for your research and contact a PacBio scientist to get started with your next sequencing project.