Bat lovers and animal researchers have been waiting for insights into the evolution and remarkable genetic adaptations of our winged mammalian friends, ever since the global Bat1K initiative announced its quest to decode the genomes of all 1,300 species of bats using SMRT Sequencing and other technologies.

Now, the first six reference-quality genomes have been released on the Hiller Lab Genome Browser, and described in a pre-print by Sonja Vernes (@Sonja_Vernes), Michael Hiller (@hillermich) and Gene Myers (@TheGeneMyers) of the Max Planck Institute, Emma Teeling (@EmmaTeeling1) of the University of Dublin, and 26 others.

What did the researchers find? Enough to excite evolutionary biologists, immunologists, and bat enthusiasts alike.

The phylogeny of Laurasiatheria and, in particular, the position of bats, has been a long-standing, unresolved evolutionary question. Phylogenetic analyses of 12,931 protein coding-genes and 10,857 conserved non-coding elements identified across 48 mammalian genomes helped to resolve bats’ closest extant relatives within Laurasiatheria, supporting a basal position for bats within the clade Scrotifera. 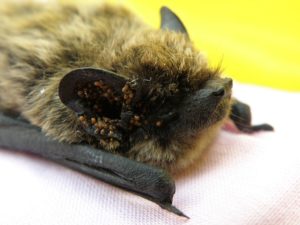 Bats are suspected reservoirs for some of the deadliest viral diseases, including Ebola, SARS (severe acute respiratory syndrome), rabies, and MERS (Middle East respiratory syndrome coronavirus). But they appear to be asymptomatic and survive these infections. Figuring out why could increase our understanding of immune function and help prevent viral spillovers into humans.

In order to further understand the bats’ viral responses, the researchers screened the genomes to ascertain the number and diversity of endogenous viral elements, considered as ‘molecular fossil’ evidence of ancient infections.

They found a surprising diversity of endogenous retroviruses, with some sequences never previously recorded in mammalian genomes, confirming interactions between bats and complex retroviruses, which endogenize exceptionally rarely.

Bats also exhibit extraordinary longevity—they can live up to 10 times longer than expected given their small body size and high metabolic rate. Only 19 mammalian species are known to live proportionately longer than humans given their body size, and 18 of these are bats.

“Bats show few signs of senescence and low to negligible rates of cancer, suggesting they have also evolved unique mechanisms to extend their health spans, rendering them excellent models to study extended mammalian longevity and ageing,” the team writes.

Within the six new genomes, the team found a loss of the oncogenic miR-374 gene, which promotes tumour progression and metastasis in diverse human cancers, and selection for PURB, a gene that plays a role in cell proliferation and regulates the oncogene MYC74, and exhibits a unique anti-ageing transcriptomic profile in long-lived Myotis bats.

For additional insights into bat longevity, check out another recent Nature Ecology and Evolution paper by co-author Emma Teeling, and this behind-the-paper feature. Studying the genetics of echolocation, vocal learning, and sensory perception in bats could shed light into human blindness, deafness, and speech disorders.

The Bat1K group found two genes expressed in the cochlea and associated with human disorders involving deafness — LRP2 (also called megalin) and SERPINB6 — which seemed to be linked to echolocation. There were bat-specific substitutions in both genes; echolocating bats showed a specific asparagine to methionine substitution in LRP2, whereas the non-laryngeal echolocator Rousettus substituted for a threonine.

They annotated between 19,122 and 21,303 coding genes using the PacBio Iso-Seq method of RNA sequencing. They also annotated non-coding RNAs and microRNAs, which can serve as developmental and evolutionary drivers of change, and identified important differences in ncRNAs between bats and other mammals.

This revealed extensive loss of ancestral miRNAs, gains of novel functional miRNA and a striking case of miRNA seed change that alters target specificity, pointing to a possible evolution of regulatory roles in cancer, development, and behaviour in bats.

“This is the first laboratory validation of novel bat microRNA function and highlights how Bat1K genome assemblies can enable the discovery of both non-coding and coding adaptations,” they wrote.

Learn more about the charter and progress of the Bat1K Project in this seminar featuring consortium director Sonja Vernes.