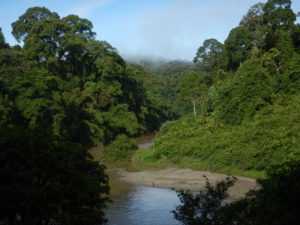 The tropical rainforests of Danum Valley, Borneo, is full of dipterocarp trees, which have a particular symbiotic relationship with fungi that is rare in rainforests elsewhere in the world. Photo by Joe Taylor

The most important creatures in a tropical rainforest aren’t necessarily the ones you can see. They work their magic underground, recycling organic matter and processing and transporting vital nutrients for their leafy neighbors above ground.

Microbiologist Joe Taylor wants to learn all about what they are and what they do. And now a grant from PacBio and Maryland Genomics will enable him to reveal some of the secrets of the soil in endangered South-East Asian rainforests.

Taylor, a Career Development Fellow in Microbiomes and Metagenomes at the University of Salford in the United Kingdom, was selected to receive the 2019 Metagenomics SMRT Grant to explore the influence of nutrient concentrations on microbial community composition and nutrient cycling capacity in the soils of an old-world tropical rainforest in Danum Valley, Borneo.

Despite worldwide attention on South-East Asian rainforests due to their charismatic megafauna of orangutans, clouded leopards and elephants, and the threat to the habitat by overlogging, oil palm plantations and climate change, little is known about their smaller, more abundant inhabitants.

“We don’t really have a good understanding of the below ground diversity in South-east Asian rainforests – particularly microbes, but also underground fauna like worms. All these groups have important interactions that will affect rainforest plants,” Taylor said. “Microbes, such as fungi bacteria, interact with rainforest trees in very important ways. You could lose the majority of mammals and birds in a forest (not that we’d want to) and it would still survive in part. But take away the fungi and bacteria, and there would be no forest.”

Old world rainforests differ from their neotropical counterparts in the Americas, which tend to get much more research attention and investment. One major difference is that the diversity of trees in the rainforests of Borneo is dominated by a single family, the dipterocarps, which have a particular symbiotic relationship with fungi that is rare in neotropical rainforests. Unlike other mycorrhizal relationships, such as arbuscular mycorrhiza and ericoid mycorrhiza, ectomycorrhizal fungi do not penetrate their host’s cell walls. Instead, they form an intercellular interface of highly branched hyphae that help the plant take up nutrients, including water and minerals, often helping the host plant survive adverse conditions. In exchange, the fungal symbiont is provided with access to carbohydrates.

Among the key nutrients Taylor and collaborators from the Universities of York, Manchester and Aberdeen in the UK and Universiti Malaysia Sabah and Sabah Forestry Department  in Malaysia are studying is phosphorus, a limiting nutrient for plant growth in rainforests. In the rainforest, phosphorus transfer to trees is mediated by mycorrhizal fungi and bacteria. Initial fieldwork conducted over several weeks in 2015, 2016 and 2017 has revealed different pools of phosphorus and other nutrients throughout the topographically diverse 50 hectare site. Experimental work carried out by the group has also shown that these different phosphorus pools impact the growth of the arbuscular and ectomycorrhizal trees differently.

In addition to DNA extracted from tree roots, Taylor and his colleagues have collected more than 200 DNA samples from soil. Short read sequencing has already generated a huge amount of taxonomic data that has provided insight into the soil composition, the spatial distribution of the different species, and how they interact. However, delineating the different metabolic pathways involved in the phosphorus cycle has been more challenging.

“It has already revealed a large amount of data on who is there, but we don’t know what they are doing,” Taylor said. “Nutrient concentrations throughout the plot are highly variable and show clear effects on above-ground plant diversity and root-associated fungi, but we do not know to what extent nutrients influence microbial function within the soil.”

They are hoping metagenomic profiling via SMRT Sequencing will provide the functional genomic information they need to elucidate the metabolic dynamics both within and between species.

Taylor said he’s been eager to try PacBio sequencing for a long time.

“There’s an incredible use of PacBio in long-read amplicon sequencing in the microbial work I do,” he said. “For detailed phylogeny and taxonomy, long reads are essential.”

As many of the microbes will likely be “unculturable,” the long, highly accurate HiFi reads will enable the discovery of novel genes from unknown species that would be challenging to characterize with other approaches.

“That’s one of the reasons why this metagenomic data is so important. It will give information on all organisms in the samples, regardless of our ability to culture them,” Taylor said. “The ideal would be to get complete genomes from this metagenomic data. That would be amazing. But so little work has been done that anything we reveal is going to be novel and useful.”

Taylor’s work is taking place in a pristine forest that has been preserved and protected from logging. But, as in all habitats, the area is still threatened by climate change.

“We’re seeing more variable weather patterns,” Taylor said. “When we first visited the rainforests in 2015, it may sound strange, but the ‘rain’ forest was going through a period of ‘drought’ in the area that brought much less water than usual. This continued drought had a significant impact on functional traits of the rainforest trees.”

Research on ectomycorrhizas is increasingly important in ecosystem management and restoration, forestry and agriculture in areas like Borneo, which hosts more than 6,000 species found nowhere else on earth, thanks to its evolutionary isolation after the last ice age.

“PacBio sequencing will fundamentally change our understanding of microbial phylogeny and the capacity of soils to cycle nutrients in South-east Asian rainforests, providing many questions for further study,” Taylor said. A gibbon (left) and red-leaf monkey in the Danum Valley rainforest. Photos by Joe Taylor.

We’re excited to support this research and look forward to seeing the results. Check out our website for more information on upcoming SMRT Grant Programs for a chance to win free sequencing.

Thank you to our co-sponsor and PacBio certified service provider, Maryland Genomics, for supporting the 2019 Metagenomics SMRT Grant Program.