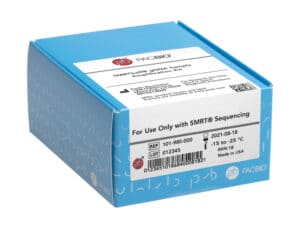 It’s one of the questions we hear most often from scientists working with small organisms: Is it possible to generate truly high-quality, long-read data from minuscule amounts of DNA? With our new kit for ultra-low DNA input projects, the answer is: Absolutely!

The new workflow dramatically reduces the requirements for DNA quantity. Now, scientists need only 5 ng of genomic DNA to kick off a SMRT Sequencing project — that’s less than 2% of the starting volume needed for our current low DNA input protocol. This opens up access to HiFi sequencing for researchers studying the tiny arthropod species that comprise much of the diversity of the tree of life. In addition, the new protocol enables comprehensive variant detection in input-limited human samples such as needle biopsies.

Ultra-low DNA input sample preparation relies on the SMRTbell gDNA Sample Amplification Kit (PN: 101-980-000), which uses PCR amplification to help users get enough material for sequencing. The kit contains enough reagents to process up to 18 samples and can be used for de novo genome assembly of arthropods with genomes no larger than 500 Mb or for human variant calling. Of course, if your sample quantity is not limited (> 5 μg of DNA is available), we encourage you to follow the standard HiFi protocol for best results.

To put it to the test, we used the ultra-low DNA input kit to sequence the sand fly (Phlebotomus papatasi), starting with just 5 ng of DNA from a single insect, which we sequenced on our Sequel II System to 55-fold coverage. We generated nearly 2 million HiFi reads with accuracy of at least Q20, producing nearly 25 Gb of HiFi reads from one SMRT Cell 8M. Mean read length was 12 kb, and mean read quality was 99.97%, or Q36. This tiny insect had a genome size of 363 Mb, and our assembly featured a contig N50 of more than a megabase.

In addition, in their new preprint, the Max Planck researchers and collaborators used the ultra-low DNA input kit to sequence two species of springtail (Collembola). In the preprint, the authors stated, “Our study shows that it is possible to obtain high quality genomes from small, field-preserved sub-millimeter metazoans, thus making their vast diversity accessible to the fields of genomics.” To hear more details about research using the ultra-low DNA input kit, watch the on-demand webinar.

To get started using the ultra-low DNA input protocol for your next project, review the protocol, connect with a scientist at PacBio to discuss your research, or visit our Product and Services Page to purchase your consumables.