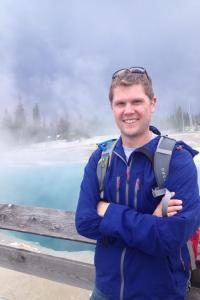 While some microbiologists can study their organisms of interest by growing them in cultures in the lab, many don’t have that luxury.

Most microbes and algae cannot be cultured, which is why environmental microbiologist Cody Sheik relies so heavily on DNA sequencing and why he is especially excited to use the PacBio platform for metagenomic studies using both targeted and shotgun sequencing approaches.

Sheik’s first exposure to PacBio sequencing came shortly after joining the faculty at the University of Minnesota at Duluth, where the sulfate-reducing bacterium Desulfovibrio desulfuricans strain G11 was being used as a model organism. First isolated in 1979, the microorganism has a long history in syntrophy research, but had never been fully characterized. So Sheik set out to do so, publishing its first complete genome sequence in 2017.

Since then, he has used the PacBio platform in several ways in the Sheik Aquatic Geomicrobiology Lab, where he studies the roles, diversity and biogeography of novel microorganisms in sediment, water columns, hydrothermal springs and deep subsurfaces.

As he described in a recent webinar, he is using amplicon sequencing to monitor eukaryotic phytoplankton communities in the Great Lakes. By amplifying the 18S rRNA gene, a commonly used eukaryotic phylogenetic marker, his team is able to trace the presence of diatoms or other phytoplankton at different locations and time points in a way that is more revealing and less time consuming that traditional microscopy methods.

He is also hoping to use amplicon sequencing to overcome some of the limits of current DNA-based approaches to track invasive species, which require PCR primer sets specific to each species.

“This approach is very limited – you’re looking for one species per water sample,” Sheik said.

This summer, his team will test an approach that involves amplifying a common eukaryotic gene that several species should have and develop a broader assay for many invasives, which will allow them to get answers “more rapidly than what we could do with just a PCR-based approach.”

In another line of inquiry, Sheik is examining the complex composition of “rock snot,” or Didymosphenia geminata, an invasive microscopic algae (diatom) that can produce large amounts of stalk material to form thick brown mats on stream bottoms.

“Within this rock snot itself, you actually have multiple species of diatoms, and because it’s this very polysaccharide rich matrix that they live in, it’s really hard to pick individual cells out,” Sheik said.

He is hoping to extract high molecular weight DNA and generate draft genomes with long scaffolds from organisms in the snot rock matrix using a combination of the PacBio platform and DNA cross-linkage. Sheik and colleagues deep in the Soudan Mine

Sheik’s most ambitious project, however, is a $1 million NSF-funded study into how microorganisms thrive in an extreme environment half a mile underground in the Soudan Iron Mine near Ely, Minnesota. Microbial communities there live amongst rocks formed 2.8 billion years ago in salty water rich in iron but without oxygen. Their composition seems to differ greatly from each other, even those located very close together, and Sheik wants to know how and why.

“Here’s where I’m getting really excited using the PacBio platform to really go after some of these interesting organisms living in these sorts of communities using metagenomics,” he said. “We’re also interested in using methylation patterns from PacBio sequencing to look at population structure,” since methylation fingerprints can vary significantly even between two strains of the same species.