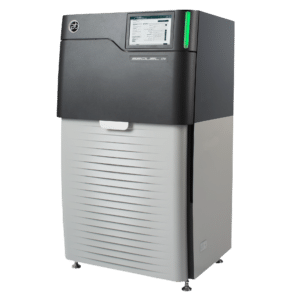 Still soaring from the success of last year’s launch of the award-winning Sequel II System, we’re excited to announce the next evolution of the instrument: the Sequel IIe System.

This evolution includes increased computing power and advanced on-instrument data processing. This means the instrument can directly produce the widely coveted, highly accurate long reads, known as HiFi reads, that have made the original Sequel II System indispensable for many labs — and save users time and money in the process.

Just how much of an improvement does the new system represent? By completing all the primary data processing for HiFi reads on the instrument, the Sequel IIe System provides as much as a 90% reduction in file storage needs, and a 70% reduction in secondary analysis processing time.

“Generating HiFi reads directly on the Sequel IIe System now has the potential to further accelerate cost-effective access to this information-rich sequencing data.”

HiFi sequencing has provided important data for a number of high-profile global research projects, including the Telomere-to-Telomere Consortium, Darwin Tree of Life, the  Human Pangenome Reference Consortium, and the Solve-RD Project, among others. The precisionFDA Truth Challenge V2 evaluated methods for variant calling in human genomes and highlighted how approaches that use HiFi reads delivered the highest precision and recall in all categories including genome-wide, specifically in difficult-to-map regions, and in the major histocompatibility complex.

Our CEO, Christian Henry, noted: “The new Sequel IIe System represents the next advancement in our technology, and makes HiFi sequencing accessible to any project where high accuracy, long read lengths, and affordability matter.”

See how HiFi sequencing combines the best aspects of short reads and long reads into a single easy-to-use technology.

Want to learn more? Attend our on-demand webinar to hear from existing users how the new Sequel IIe System is making it easier than ever before to get started with HiFi reads or add capacity.

Want to discuss the benefits of HiFi sequencing and the Sequel IIe System for your research? Connect with a PacBio Scientist.