The Sequencing of the Octoploid Strawberry Genome Uncovers its Evolution


By Ángel Vergara Cruces, Universidad de Málaga
Plant geneticists have achieved a sweet feat: the first assembly of the octoploid strawberry genome.
As reported in Nature Genetics earlier this year, a team led by Steven J. Knapp of the University of California-Davis and Patrick P. Edger of Michigan State University, identified more than 100,000 genes in their high-quality assembly and annotation of the commercial strawberry, Fragaria x ananassa.
The main challenge when assembling a polyploid genome is that similar regions in different subgenomes (so-called homeologous regions) can lead to uncertainty about where to assign a given read when using methods that produce short reads. To overcome this challenge, the authors combined short-read and long-read genome sequencing technologies.
They initially assembled the genome using Illumina and 10X Genomics data. Next, they used Hi-C to obtain bigger scaffolds and inform of sequences in the genome that are physically close. As these interactions occur more frequently between contiguous sequences, Hi-C can help to correct misjoined reads and reduce the number of scaffolds.
Finally, PacBio long-read sequencing was performed to clarify difficult sections to map, such as repetitive stretches of the genome. In this way, PacBio SMRT Sequencing helped to fill in the gaps between the scaffolds and bring the assembly to 28 pseudomolecules, encompassing 99% of the estimated size of the genome.
With the genome in hand, the authors were able to unravel some long unresolved question in the field about which exactly were the diploid parentals that contributed the four subgenomes present in F. x ananassa.
The Fragaria genus has diploid, tetraploid, hexaploid and octoploid species. F. vesca and F. innumae are two wild diploid species that were previously identified as parentals. The new genome, combined with an extensive transcriptomic analysis of every diploid species, allowed the additional identification of the previously unknown F. niponica and F. viridis as ancestral parentals.
The distribution and natural history of these species allowed the researchers to hypothesize that an hexaploid species from Asia, resulting from hybridization between F. innumae, F. niponica and F. viridis, hybridized with F. vesca in North America, giving rise to the octoploid strawberry and a single dominant subgenome, which largely controls its metabolomic and disease-resistance traits.
Events of polyploidy and genome rearrangements are of paramount importance in plant evolution and domestication. They are usually followed by diploidization, and lead to neo- and sub-functionalization of duplicated genes and changes in the regulation of gene expression. This new polyploid genome promises to be an amazing step towards a better understanding of these phenomena, and will no doubt provide a powerful resource for breeders. 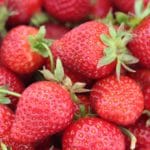 Another team of scientists at the Jiangsu Academy of Agricultural Sciences in China recently reported their use of PacBio Iso-Seq analysis to establish a high-quality reference transcriptome for cultivated strawberry (Fragaria x ananassa), providing insight into many metabolic and signaling pathways. To learn more about their findings, read their publication in Horticulture Research.