Catching up with Carola and the ‘Solar-Powered’ Sea Slug 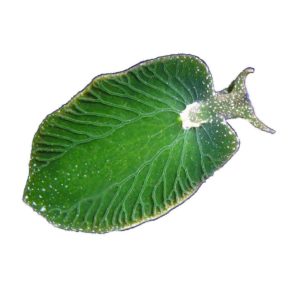 Two years ago, Carola Greve and colleagues at the Zoological Research Museum Alexander Koenig in Bonn, Germany, were seeking to #SeqtheSlug as part of the 2017 Plant and Animal SMRT Grant competition, and the popular project was a close runner-up. Greve didn’t give up on her quest to sequence the ‘solar-powered’ sea slug. We caught up with her recently at the SMRT Leiden Scientific Symposium, where her update on the sea slug project earned her a Best Poster award.

Why the sea slug?
Although Mollusca represents the second largest animal phylum with around 85,000 extant species, only 23 mollusc genomes are publicly available on NCBI genome database, and when we started our project, no reference genome had been generated for any sacoglossan (algae-ingesting) mollusc. Some of these sacoglossa species are particularly interesting because of their ability to sequester chloroplasts from its food algae. These ‘stolen’ plastids, also known as kleptoplasts, are then stored in a functional state in the digestive gland cells of the slugs and presumably allow them to endure weeks or even months of starvation.
How do the slugs keep the chloroplasts active which continuously produce starch inside the slugs? No one knows! But up to now, this spectacular phenomenon, termed functional kleptoplasty, is unique among animals. We wanted to scour the genome for genes associated with this unique ability and further provide a valuable genomic resource for future genome-wide comparative analyses to organisms with similar lifestyles, i.e. those stealing useful parts out of their prey and incorporating, instead of digesting them.
How has the project progressed? We created a mitochondrial genome for Plakobranchus cf. ocellatus (van Hasselt 1824), a sea slug species found in the Philippines, using Illumina short reads and another team (Huimin Cai, et al. 2019) beat us to a draft genome assembly earlier this year, of the Elysia chlorotica species, using a hybrid Illumina/PacBio approach. Their genome assembly comprised 9,989 scaffolds, with a total length of 557 Mb, and their annotation identified 176 Mb (32.6%) of repetitive sequences with 24,980 protein-coding genes.
We’d like to improve the genome using PacBio, and we are now working with Kornelia Neveling a molecular geneticist at the Genome Diagnostics Nijmegen, Radboud University Medical Center to get some good reads from our P. ocellatus samples. Once we get the results, we want to compare the genomes of the two slug species, as well as examine the secondary metabolites that they produce, such as polypropionates, which might be interesting for pharmaceutical applications.
What have you learned so far?
We’ve learned that it’s really difficult to extract high molecular weight DNA from these slimy creatures, and there seems to be something in the process that is inhibiting the enzymes involved in sequencing. The challenges have helped me in my new role, however. I am now at the Senckenberg Research Institute and Natural History Museum in Frankfurt, where I am leading the Translational Biodiversity Genomics lab. One of our main purposes is to extend biodiversity research to non-model organisms, and make it more accessible for basic and applied research. As part of this, we are establishing DNA extraction protocols for species that are hard to work with, such as worms, insects, slugs, and historical museum samples.

Have an interesting project you’d like to try using SMRT Sequencing? For a look at our ongoing and future SMRT Grant programs, check out www.pacb.com/smrtgrant