The rarest day on the calendar is February 29th — which makes it the perfect time to celebrate Rare Disease Day. On this day, we join millions of people around the world making time to honor the patients, caregivers, healthcare professionals and scientists who deal with rare diseases every day.


And we didn’t have to look far to find someone affected.
Bioinformation John Harting, of our Applications Development group at PacBio, came face-to-face with the rare disease that is the most common genetic disease in infants — spinal muscular atrophy (SMA) — when his first child, Zoe, was three months old.
Everything seemed normal when she was born in October 2012, but John and his wife Eliza started to notice that Zoe didn’t have a lot of strength nor activity.
“We were new parents so we didn’t know any better,” John says. “We asked the doctor a couple times, but we kept getting answers like: ‘Some children develop slower,” or “Maybe she has a bit of hypotonia that will go away.’ Basically, they were reluctant to look much deeper.”
During a holiday visit to the in-laws, however, John noticed how little his daughter was moving compared to her cousin, who was a few weeks younger. The couple returned to their doctor and demanded testing. A few weeks later, they got a call from a neurologist, suggesting they come in to meet with a doctor and social worker.
“It was pretty scary to get that call and to drive to the hospital expecting bad news,” John says.
And the news was indeed bad. Zoe was diagnosed with Type 1 SMA, the most severe form of the fatal degenerative neuromuscular disease.
“They told us, basically, that within two years she was going to pass, and we could just hold her and love her and let her go. That was all we could do. There were no treatments at the time.”
Fortunately, that was not the case. The couple switched pediatricians, and the new doctor happened to have attended a conference where she heard a presentation by Stanford pediatric neurologist John Day about a new potential SMA treatment, and a clinical trial recruiting candidates.
Zoe was accepted on the trial and became the first child in the world to receive the experimental drug, Nusinersen, now approved by the FDA and sold as Spinraza.
Zoe is now a 7-year-old first grader with a strong personality and growing independence, who loves to chase her classmates around the playground in her mini motorized wheelchair.
“She’s slowly started to achieve milestones that SMA Type 1 patients never did before,” John says.

Contributing to the Cure
John says he is proud to be working at a company that is helping to make further advances in rare disease treatment possible.
While any given rare disease affects a relatively small number of people, these diseases collectively affect some 400 million people around the world. About 7,000 rare diseases are currently recognized.
In the case of SMA, the disease is triggered by a gene mutation that is actually quite common: it is estimated that 1 in 40 people carry it. When both parents have the mutation, their child can develop the disorder, which causes muscles to atrophy because they don’t receive the right signals from the spinal cord.
Genetic screening and early intervention is crucial. But this is tricky. Standard tests that use PCR (polymerase chain reaction) and short read technologies don’t always put mutations in the right context.  For example, there may be “pseudogenes,” where big stretches of the genome are replicated and look almost identical, making it difficult to distinguish between true carrier genes and other kinds of unusual gene conversions.
“There can be false negatives. Someone could look like they are not a carrier, when in fact they have two copies of the gene, but they are both on one chromosome, instead of one on each chromosome” John says.
PacBio sequencing is changing that, by allowing scientists to read parts of the genome that have been difficult to reach until now. John has also been collaborating with others to dive deeper into target genes and to develop assays for diagnostics and drug development.
“A lot of these rare diseases are genetic, and are in places that are difficult to sequence, where they overlap with more common diseases,” John says.
“There’s a lot of interesting stuff that goes on that’s almost invisible to some of the other technologies and we can help to learn more about them and contribute to some important medical discoveries.” 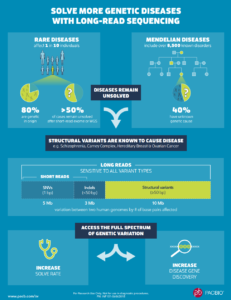 Rare disease researchers are increasingly turning to PacBio long-read sequencing technology to study areas of the genome inaccessible by other means, or to unravel complex disease-causing variants, such as tandem repeats, structural variants, complex rearrangements, and transposable elements.
Long reads can be a straightforward way to detect repeat changes because an adequately long read can encompass an entire expanded repeat as well as flanking unique sequences, for example.
In a review in the Journal of Human Genetics, Satomi Mitsuhashi and Naomichi Matsumoto from the Yokohama City University in Japan note that “long-read sequencing is especially highly recommended when repeat diseases or complex chromosomal rearrangements are suspected.”
The SOLVE-RD research program, a European-based consortium of more than 20 institutions, is also using the PacBio Sequel II System to sequence more than 500 whole human genomes with the aim of pinpointing disease-causing variants.
“Even with exome sequencing, as many as 50% of rare disease cases remain unsolved. The SOLVE-RD team believes that long-read SMRT Sequencing will be essential for discovering the causal elements that have proven elusive with previous approaches, and we anticipate that this research will ultimately make it easier for doctors to diagnose other patients with these rare diseases in the future,” said SOLVE-RD team member Alexander Hoischen, Associate Professor for Genomic Technologies and Immuno-Genomics at Radboud University Medical Center.
Hoischen gave examples of some recent discoveries in a number of conditions — from ALS and FTD, SCA10 and Parkinson’s disease, to Myotonic dystrophy, Bardet-Biedl syndrome, and Fragile X disorders — in a review paper in Frontiers in Genetics.
At PacBio, we are continually inspired by our users who focus on the study of rare diseases, and we are committed to supporting such research. Two recent SMRT Grants were awarded for projects devoted to advancing our understanding of spinocerebellar ataxia (Cleo van Diemen at the University Medical Center Groningen) and myotonic dystrophy (Stéphanie Tomé of the Centre de Recherche en Myologie at Sorbonne Université/INSERM in Paris).
We are also official supporters of Rare Disease Day, and we ask that you join us this Saturday by taking the opportunity to honor the entire rare disease community, including those who live with a disease and the many researchers striving to improve their situation. Participate on social media using #RareDiseaseDay, #ShowYourStripes, or #ShowYourRare. Or make it an IRL experience: find events to join in the U.S. or around the world to help show your support and raise awareness for those affected.
You can also support the Harting family’s efforts to purchase a van to transport Zoe more easily.

To hear the latest in rare disease research, register to watch our on-demand webinar: Increasing Solve Rates for Rare and Mendelian Diseases with Long-read Sequencing.