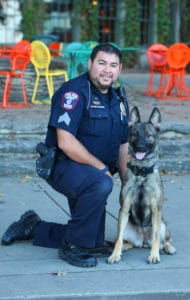 Maya and her partner, Sgt. Nic Banuelos, of the UWPD K9 unit

First there was Shadow, the poodle owned by gene-entrepreneur Craig Venter. Then there was Tasha, a female Boxer. Will the next de-coded dog be Maya, a German Shepherd Dog that helps police the campus at the University of Wisconsin-Madison?

We caught up with the Comparative Genetics Research Laboratory to find out more about their project, which garnered more than 3,000 votes in a close online video competition amongst six finalists from institutions around the world.

When the genome assembly of Tasha the Boxer was released in 2005, little information was available about genomic structural variation in a domesticated species that has breed structure.  At the time, a general consensus in the canine genetic community was well described by Kerstin Lindblad-Toh of the Broad Institute when she stated “A dog is a dog in a genomic sense.”

Not necessarily. As Binversie points out in the UW-Madison team’s crowd-pleaser video, the differences between Ms. Priscella the Papillon and Luna the Great Dane, are extensive, even though they are the same species. The 250+ breeds of dogs display variation in a wide range of traits. There are giant breeds and toy breeds; curly coats and straight coats; short snouts and long snouts; short legs and long legs.

Different breeds also have different disease risks. More than 350 inherited diseases have been described in domestic dogs, nearly half of which predominate in a single breed or a small group of breeds.

Despite this phenotypic variation, there is still only one canine reference genome. It was updated with additional transcriptome data in 2014, but according to Sample and Muir, it’s just not cutting it anymore. The extent of breed-related genomic structural variation remains an important research question. “Sequencing technologies are evolving rapidly, and they are refining the approaches by which research questions should be addressed,” Muir said. “Maybe, over time, we will be able to focus more on using de novo assembly for genome analysis. Until then, it will be important to have high-quality reference genomes.”

PacBio SMRT sequencing will finally enable Sample to delve deeply into the structural variation that exists between breeds, so that she can better understand their unique traits and diseases.

Among those diseases is fibrotic myopathy, a rare disorder that causes hind limb lameness in the German Shepherd Dog. The condition is especially crippling for service dogs who work with police and military officers, and there are no successful treatment options.

“The selective breeding that occurs creates fascinating genomic architecture specific to each breed. Understanding that further is going to be quite important,” Sample said.

Dogs will not be the only ones to benefit from the project, Muir said.

Since dogs were first domesticated more than 10,000 years ago, they have lived closely alongside humans, and have shared many of the same pathological, dietary and environmental conditions. Understanding their genetic evolution could shed light on ours as well.

“This is a positive step for veterinary medicine in general, and for animal and human One Health studies,” he added.

The UW-Madison team is currently selecting a candidate dog to sequence. They want a local companion animal or working dog whose health history is well documented, including orthopedic and neurological status. They also intend to follow the health of the dog over time, and conduct additional post-mortem studies for an even richer dataset, possible years into the future when the dog passes away. The “Shroud of Muir”

The team’s first experience with a multimedia grant application was a fun yet frantic one, involving some mass emails to users of the UW–Madison School of Veterinary Medicine to avoid panic when the police K9 unit (and its siren) showed up for the video shoot.

The publicity, which included a brief spot on local television, provided a great opportunity for some community education.

Although Binversie said she hasn’t been asked for any autographs yet, traffic to the group’s Facebook page skyrocketed, and owners of all breeds have been in touch to offer support — and samples.

As for the “Shroud of Muir,” the carpet was given as a gift from a Turkish visiting professor. Instead of being used as a mat for frustrated students to wipe their feet on, as Sample first anticipated, it has a place of honor in the computer laboratory.