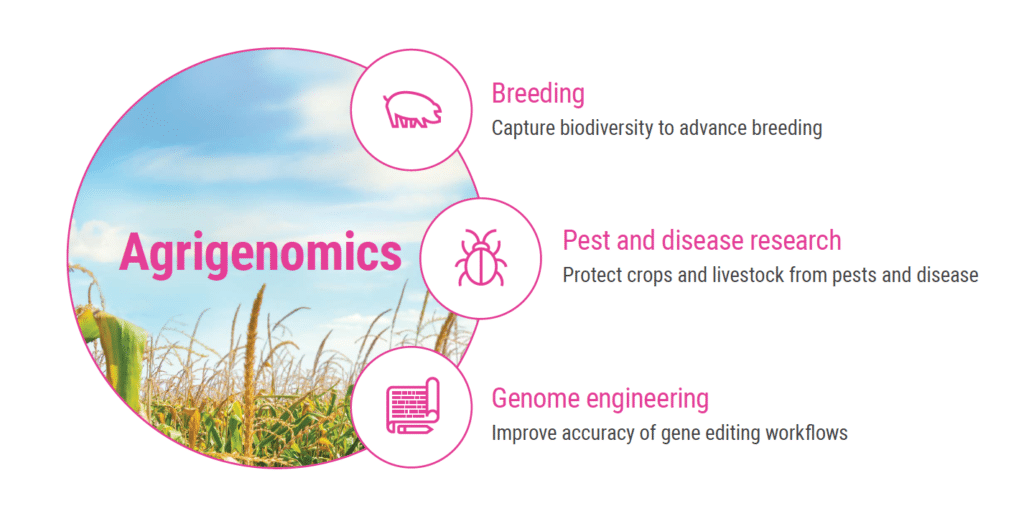 Advancements in genome engineering and other programmable molecular techniques are showing great promise in agriculture, with the potential to address food security and industrial sustainability.

To be able to write new genomes, scientists must be able to rapidly and reliably read the genome. Luckily, HiFi sequencing provides a solid solution, offering high-quality reference genomes to help researchers design their editing experiments, and comprehensive sequence data that can be used to validate constructs, confirm edits, and evaluate off-target effects.

Plant breeders are constantly in search of ways to expand crop diversity, and CRISPR-Cas9 is the latest tool in their kit. Precisely modified genomes could help contribute to the food security, commodity diversity, and sustainability necessary to meet growing global demands. But how can they ensure their edits are precise, with no dangerous unintended off-target effects?

HiFi sequencing can help. Long-read, highly accurate sequencing can capture both on- and off- target effects to fully evaluate editing outcomes on a targeted and genome-wide scale.

When Swiss researchers took on an ambitious project to improve cassava crops with Cas9 editing, they used PacBio sequencing to track the changes, such as deletions, insertions, and frameshift mutations in their modified genes in order to better understand their genomic and phenotypic properties. 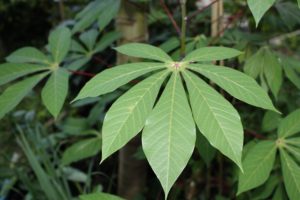 Cassava (Manihot esculenta Crantz) is a multipurpose crop cultivated for food, and is among the top five most important sources of carbohydrate globally. Thanks to its drought tolerance and suitability in marginal environments, the starch-rich storage roots have become a staple food in tropical and subtropical countries. Its gluten-free properties have also made it increasingly popular in western countries, leading to a 60% increase in global harvest between 2000 and 2012. The roots are also an important commodity and are used for manufacturing paper, beverages, biodegradable materials, animal feed, pharmaceuticals, and biofuels.

As a result, scientists have eyed cassava as a candidate for genetic engineering. Unfortunately, the vegetable is recalcitrant toward genetic transformation and in vitro regeneration and exhibits poor fertility in some breeding lines and farmer-preferred varieties. Even conventional breeding programs for the introgression of traits is very time-consuming and flowering in glasshouse environments seldom occurs, with sexual reproduction yielding few seeds.

To combat these obstacles, scientists from the Institute of Molecular Plant Biology, ETH Zurich, set out to use genome editing to accelerate crop improvement. Using CRISPR-Cas9 methods, they introduced targeted mutations to yield transgene-free progeny with novel properties.

One of the properties that was modified was starch biosynthesis. Natural varieties of potato, maize, and wheat with amylose-free starch are cultivated for their desirable cooking and processing qualities, and the scientists sought to replicate this valuable trait.

They turned to another well-studied plant, Arabidopsis, to find genetic targets. Mutations in GBSS (granule-bound starch synthase) or PTST1 (protein targeting to starch) genes in Arabidopsis have been shown to produce amylose-free starches, but the effect of PTST1 mutations in any other plant species were unknown.

Through targeted mutagenesis of GBSS or PTST1, the team generated several lines containing a spectrum of different amylose contents. They also induced the expression of AtFT to ensure rapid flowering, even in greenhouse conditions, and heritability of edited lines. Two of the progenies successfully inherited the allelic edits, without picking up foreign DNA (transgene-free).

To check for any other possibly deleterious impacts on plant morphology, physiology, and agronomic trait caused by unintended (“off-target”) cleavage and mutagenesis of genomic DNA, the new plant lines were sequenced with PacBio technology to identify nucleotide insertions/deletions (indels) resulting from Cas9-mediated cleavage and nonhomologous end joining (NHEJ); no cleavage products or indels were identified.

The authors said they hope the success of the experiment will lead to widespread uptake of cost-effective, transgene-free crops with useful new traits to complement other breeding schemes.

“The ability to efficiently modify genes in highly heterozygous crops, combined with accelerated time to flowering to generate transgene-free progeny with a homozygous trait, should save several years over conventional breeding approaches and phenotypic recurrent selection,” the authors wrote.

As in crops, breeding for certain traits in livestock could help pave the way for a less cruel industrial food production system that is also better for the environment.

CRISPR-based genome engineering could enable scientists to create designer domesticates without the need to rely on viruses and bacteria to shuttle DNA around.

A team from the University of California, Davis, led by Alison L. Van Eenennaam (@BioBeef) and Joseph Owen, took on the challenge. And a challenge it certainly was. The first difficulty was identifying where to place the gene they wanted to insert (SRY, a sex determination gene that would trigger male offspring). The bovine reference genome available at the time they started the experiment (2014) was more than a decade old, and far from complete. In their initial attempt, they targeted a section of X chromosome that appeared to be in non-critical ‘junk DNA.’

They later realized the area was actually essential for cell growth, a discovery made thanks to the updated bovine genome, ARS-UCD1.2, created using PacBio technology and released in 2018.

The more comprehensive reference genome helped the UC Davis team redesign their edits and steer clear of any essential genes, and PacBio sequencing came in handy later in the process as well, to help the team truly understand the full effects of their edits once a calf was born.

There were many surprises in what they found, including extra copies of the SRY gene as well as unintended insertions and deletions in various locations.

PacBio long-read sequencing was used to generate a reference assembly that included the complete bovine genome as well as the plasmid backbone and the template sequences.

It served as an example where understanding what went wrong in an experiment was just as important—if not more so–than what went right.

“Unintended homology independent insertions may not be problematic for some research applications; however this potential is untenable for embryo-mediated therapeutic applications where precise integration is requisite, and would also pose potential challenges for the regulatory approval of food animal applications,” the authors wrote.

Want to learn more about how gene editing or agrigenomics? Visit these resources: