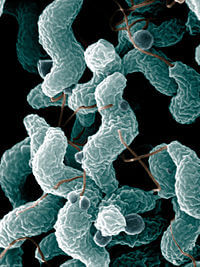 The 100K Foodborne Pathogen Genome Project announced the contribution of 20 newly finished genomes of microbes responsible for foodborne disease, and we’re pleased to report that they were sequenced and assembled using automated PacBio® pipelines.

The 100K Genome Project aims to sequence the genomes of 100,000 bacterial and viral genomes with the goal of speeding up the diagnosis and treatment of foodborne diseases and shortening the outbreak time. The global effort is led by the University of California, Davis, the Center for Food Safety and Applied Nutrition of the US Food and Drug Administration, and Agilent Technologies; Pacific Biosciences is also a partner.

The newly deposited genomes include several isolates of Salmonella, Listeria, Campylobacter, and Vibrio. They also contain a full characterization of their respective epigenomes. The genomes are available via NCBI, which also maintains a complete list of the bacteria for which finished genomes have been generated by the 100K Project.

Bart Weimer, director of the 100K Genome Project and professor at the school of veterinary medicine at UC Davis, gave this statement about the news: “These finished genome sequences represent the highest quality standard, with each strain closed in a single bacterial chromosome and the associated mobile DNA. They also contain complete associated phage or plasmid elements, which are critical for understanding pathogenicity, drug resistance, and other biologically important traits that are linked to survival.”

With the PacBio sequencing and finishing pipelines that have been put in place for these 20 genomes, the 100K Project is poised to fully sequence hundreds more microbial genomes in the coming months. We are eager to see this important effort gear up to full-production scale to make a significant impact on alleviating foodborne illness.